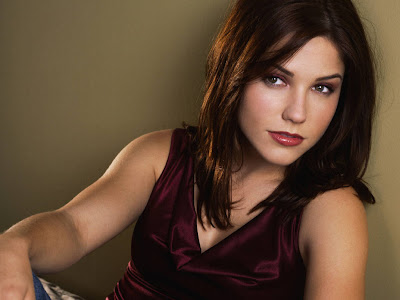 One Tree Hill hottie Sophia Bush arrives at the 2008 Teen Choice Awards at Gibson Amphitheater on Sunday, August 3, 2008 in Los Angeles, California.The 26-year-old actress is up for two surfboards this year: Choice TV Actress in a Drama and Choice TV Show for a Drama. In the actress category, Sophia is up against her costar Hilarie Burton, Grey’s Anatomy’s Katherine Heigl, and Gossip Girl stars Blake Lively and Leighton Meester.Sophia Bush also has 3 Questions to answer at Teen Choice 2008Q: What's the one thing about high school you are glad you don't have to do again?Sophia: I don't have to stay up all night writing papers anymore but I miss school though.Q: What do you think is a big issue teens have to face today?Sophia: There are so many. They attack celebrities on blogs and teenagers are attacking each other on MySpace. There is so much negativity around, especially for young women. They're so competitive. You just hope they'll learn to love themselves for what they are. Embrace yourself. I'd like to see press outlets doing stories on women of all types. We all have different goals, passions and dreams and you need examples.Q: What could you just not be without?Sophia: It's difficult when I'm traveling but if I'm going to be gone for a long time, I would never leave home without my dog. I'm away from him for four days and I'm dying to see him.
Posted by Resshell Brian F. Rojas, REB, REA at 4:58 AM