KANYE WEST IS OUT OF THE LEAGUE AND FASHION 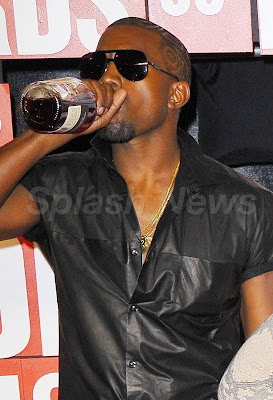 This just hasn't been Kanye West's month. First, the rapper embarrasses himself on national TV after interrupting Taylor Swift's VMA acceptance speech with yet another crazy-Kanye rant. Then, his "Fame Kills" tour with Lady Gaga is canceled.

They said low ticket sales...but we find that a little hard to believe. Now, word on the street is West's fashion line Pastelle has been dropped. Some say his pet project was given the kibosh after the designs were leaked online. But others think this may just be more negative backlash for the notoriously outspoken rapper. West has been plugging Pastelle pretty hard to just give up....He even wore a jacket with the company's logo while accepting an American Music Award for Favorite Rap/Hip-Hop Artist. I think Kanye West should seek a medical attention for his problem on his brain. I think she was not well fed during her childhood days. Kanye West, you better change your old ways man!
Posted by Resshell Brian F. Rojas, REB, REA at 8:10 AM

Kanye West is another celeb who should think about treatment programs after his crazy antics.