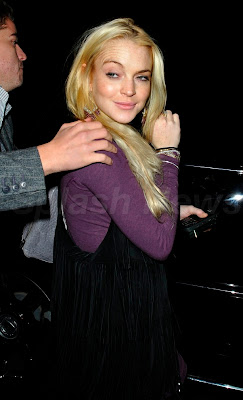 We spotted Lindsay Lohan coming from a suede party in Hollywood. She looks sleepy and I think the word drunk is more appropriate for the looks of Lindsay Lohan. She is accompanied by a male date during that night. Lindsay Lohan is going through so much this year. Her Father was another issue for her. According to sources, Lindsay Lohan might be pregnant now that she is dating the opposite sex. Lindsay Lohan has a brilliant career before fame and fortune went into her head. She was seen drinking with famous career destroyer friends and some buddies that were not helping excel in the Hollywood industry.

I think there is still hope for Lindsay Lohan to change her bad ways. Samantha Ronson has already moved on in their love story. According to sources, Sam is now dating another girl. In order to get rid of the bad publicity that Lindsay Loah is swimming right now, I think she needs to get away for a couple of months away. No cameras and pictures. She needs to be alone and do some charitable moves just like Angelina Jolie did in her career and now she has Brad Pitt in her side.
Posted by Resshell Brian F. Rojas, REB, REA at 3:49 PM